To stay healthy it is important to eat to live and not live to eat. However, indulging in an occasional non-health food centered dessert can enrich the palate and excite the taste buds. The following desserts have been chosen due to their diversity of tastes as well. These foods are not filled with essential vitamins and minerals. Instead, they are designed to be as sinfully delicious as possible. They should also be consumed rarely to avoid giving in to the battle of the bulge. One of these desserts a month should be plenty for even the owner of the sweetest sweet tooth. 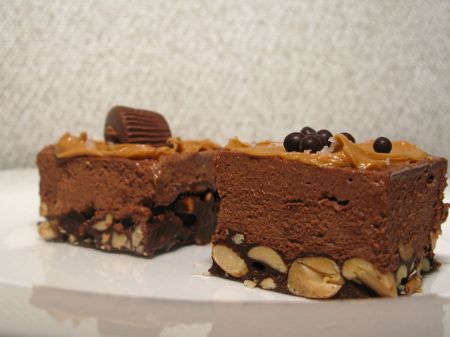 Chocolate and peanut butter are an excellent combination that has created some of the world’s favorite candy bars, such as Reese’s Peanut Butter Cups. This recipe, suggested by the My Sweet and Saucy website, makes up to eight chocolate peanut butter bars. These bars are perfect for any party.

Melt four ounces of chocolate chips in a microwave safe bowl. Add a half cup of peanuts, a quarter cup of salt and one teaspoon of canola oil to your chocolate. Mix it well and pour it evenly into a greased medium sized pan. Place the pan in a freezer while you prepare the filling.

Place three and a half ounces of chocolate chips into another microwave safe bowl and melt it. Place the bowl aside. Place a half a cup of heavy cream into an electric mixer and whisk until frothy. Pour it into another bowl and set aside. Mix three tablespoons of cream cheese, three tablespoons of peanut butter and a quarter of a teaspoon of vanilla in your electric mixture for about seven minutes. Add the chocolate and turn the speed of the mixer to low. Mix until the chocolate is well mixed and pour in your whipped cream.

Pour the filling into the pan and place back into the freezer. Spread a quarter teaspoon of peanut butter on top for garnish as well as one quarter a teaspoon of fleur del sel. Cut them into one inch squares and serve cold.

Anglamat is a great Scandinavian dessert that will delight the tastebuds

Anglamat is an angel’s food dessert designed in Norway. It is made out of apple compote, apples, sugar, bread crumbs and whip cream. It is a very calorie high dessert and should only be eaten at special occasions. It is perfect for people who wish to celebrate their Scandinavian heritage at least once a year. It requires making the filling, the bread crumbs and the whip cream from scratch, making it a time consuming dessert.

Put your apples in a large cooking pan and add the water and sugar. Place it on an oven and turn the heat on high. Wait for it to bowl, turn the heat to medium and stir the mixture until it is soft. Set it aside and let it cool.

Place your butter, breadcrumbs, sugar and cinnamon in a different pan. Heat it slowly and stir it constantly. Watch the mixture as it will begin to brown as while it heats. When the entire mix turns golden brown, turn off the heat and set the pan aside to cool.

Get out a large bowl and an electric whipper. Place the whipped cream ingredients in the large bowl and whip them until they are well whipped. Set this aside as you spoon the apple compote into four large glasses. Spoon the compote into the glass until it is about a third full. Add breadcrumbs to each glass till the glasses are two thirds full. Top the compote off with whipped cream and serve cold.

Conclusion
There are many more desserts to try out that are rich in flavor and calories. Any recipe with chocolate, whipped cream or nuts of any kind is generally tasty to many people. The important thing about these types of desserts is that they should be served only occasionally and only as an exclamation point for an otherwise healthy meal.