For almost twenty years in the food and grocery business, I’ve peddled my share of apples. As one of the best-selling fruits (next to bananas), I’ve piled them, displayed them, photographed them, wrote about them, encouraged people to buy more, to make more, to cook more, all in the name of apples.

And I hate apples.

Let me backtrack just a second. I should say I hated apples, as I was a bit too familiar with their history. Many apples we buy are held in a process called Controlled Atmosphere Storage. Apples go into a man-made hibernation where the temperature and gases are controlled, allowing them to “rest” –and not rot-– so that they can be enjoyed all year long. This is no secret and it’s not some nefarious process, per se, but I just can’t wrap my head around the fact that an apple I’m eating is 5 months old. Cheeses, yes. Apples? I’ll pass. 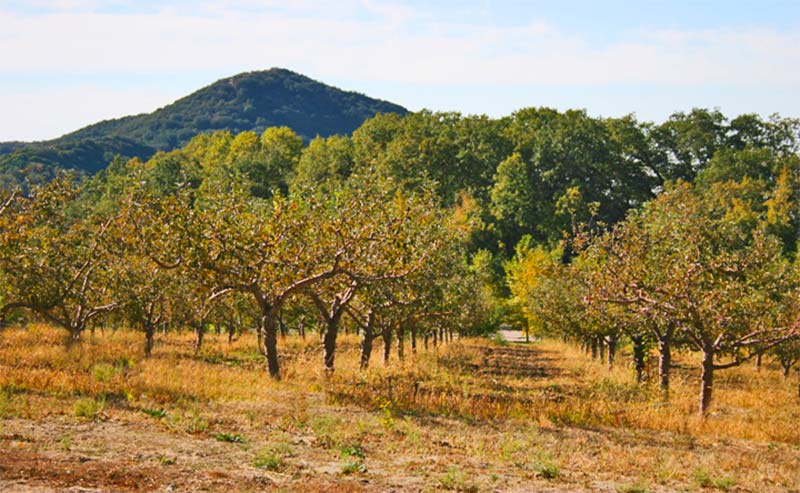 That’s not to say I wouldn’t throw an apple into my lunch bag now and then. Because of my relationship with growers and my produce guys I knew what was recently picked and that’s where I’d shop. And it’s another reason why shopping at Farmers’ Markets is ideal.

Last year a feature in the LA Times on California apples from Oak Glen piqued my interest in local apples. Oak Glen is a small town about an hour north of Los Angeles, located in the mountains. Its mile-high climate is ideal for growing apples, and Oak Glen has become someone of a cutesy, tourist town. While I was intrigued, the idea of picking apples, making applesauce, and buying old-fashioned Americana gifts isn’t really my cup of tea. All that gingham and cinnamon makes me ill. It’s all so, well, sanitized. And crafted. And fake-homey. But hey, this is Southern California after all, so I decided to just go with it and plan a day trip to Oak Glen.

Say what you will about Los Angeles, lord knows I’d probably agree with you. But to live in a metropolis that is so easily escapable is a thing of beauty. A short drive east and up into the clouds and we were in Oak Glen. The sun, air, and light was already different. And it was suddenly Fall. Orchard after orchard, tree after tree, I felt transformed and slowly started shedding off my urban funk. Would I be returning home with jars of apple butter, cider, and stuffed granny dolls that sat on shelves and smelled like spice?

Well, two out of three, for sure.

As we ran around eating apple fritters and strolling through shops while navigating our way around crazy mothers with splatter paint sweatshirts and kamikaze strollers, I was eventually persuaded to put my disdain for apples aside.

“Samples! Samples! Have you tried this apple?” asked the cute granny-lady behind the counter. “Just picked and fresh!”

Hey – she said fresh. F-R-E-S-H. Have I even tasted a really fresh apple, I thought? I sauntered over, knocked over some tourist, and picked up a slice of a Vasquez apple.

Crisp, tart, crunchy, a glorious balance of tang and sweet, without the mealy texture that I have accepted from many unfortunate apples.

I grabbed another sample. This time a Williams Pride. And then an Ozark Gold. I couldn’t stop. What the hell had I been eating up until now? Why did these actually taste good, even if they were blemished and not the most beautiful apples?

Was I having an apple epiphany?  Yes, I most certainly was. It was a Fresh Apple Epiphany.

After being told to settle down (if you only had any idea how many times in my life I’ve heard that), I regained composure and began to slowly inspect all the varieties of apples that were available. I felt as if I wanted to make up for all those years of self-imposed apple censure, I wanted to bake/stuff/chop/juice/puree/dehydrate/rehydrate every single apple I could get my hands on. Luckily Adam was with me and kept me rational. I ended up leaving with only 4 gallons of fresh cider from a single apple variety (something I’ve never had), a bag of dried apple chips, 3 jars of apple butter,  three fritters, and 2 bags of Vasquez apples. Thank god I didn’t go overboard! 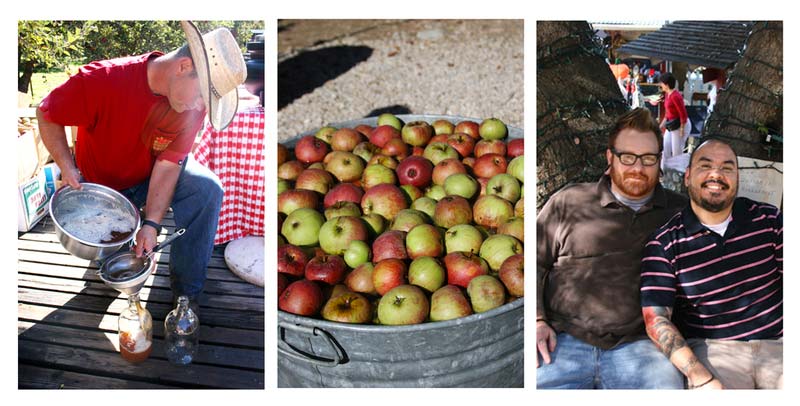 The day trip to Oak Glen was fun, amusing, and it opened my eyes to what a good, fresh apple can taste like, and not one that’s lived in a giant fridge for a season. One of these days I’ll make it to Washington state and experience Fresh Apple Nirvana Part 2, but in the meantime, I’m going to do my best to be nice to those other apples, seek out the good ones, try to eat the new crop apples and enjoy them in things other than apple martinis and calvados.